STORIES FROM THE FRONTLINES 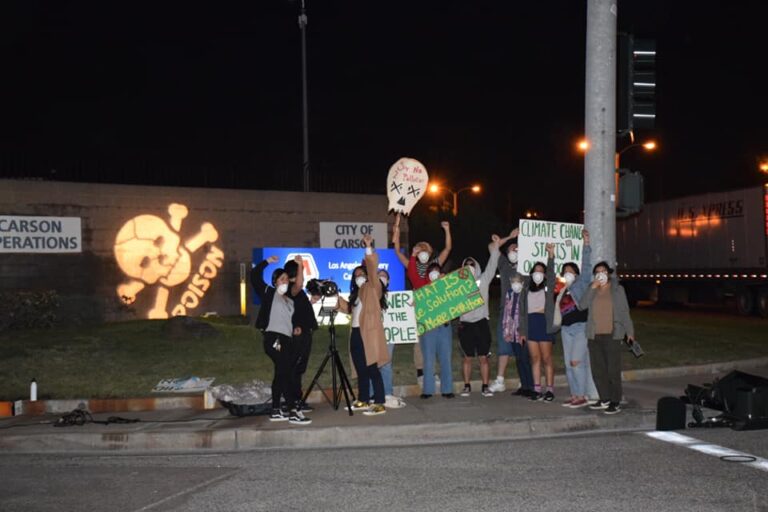 Long Beach is a port city less than 20 miles south of downtown Los Angeles. The city is known for its rich ethnic and cultural diversity, thriving LGBTQIA community, as well as a booming arts, music and dining scene. However, many of the city’s residents struggle in the face of deep and persistent racial and economic inequalities in employment, wages, education, health, housing, and transportation. Communities of color in Long Beach also bear the brunt of some of the worst air quality in the nation from the concentration of polluting industries in the city. Diego Mayen grew up in West Long Beach, a neighborhood where most of the residents are people of color. West Long Beach is a special place for Diego. It is where he grew up, went to school, and where he currently works to fight against the polluting industries that are harming his community, including the expansion of freeways, port truck traffic, and oil refineries. He became active with East Yard Communities for Environmental Justice (EYCEJ) in his sophomore year of high school, after he learned about the injustices his community has faced and continues to struggle against. Diego wants to hold harmful industries accountable for all of the toxic pollutants they release into his community. Oil refineries are one of the greatest contributors to air pollution in the area. Marathon and Philipps 66 being some of the more recognized refinery facilities in Diego’s community. In Diego’s words:

“The people in my community work hard to live a good life but with industries such as oil
refineries polluting our air makes it difficult. Many community residents over the years
develop health issues, such as respiratory illnesses, because of the air they breathe due
to the close proximity to the oil refineries. Growing up near these facilities, there would
be days at school where the air was so bad that we had to stay indoors. There were
other days where my classmates would get headaches due to some strange smells
coming from the refineries and the oil facilities.”

Studies have shown that these nearby oil refineries release volatile organic compounds, including carcinogens, as well as nitrogen oxide and fine particles, which have been linked to blood cancers, heart disease and asthma. Phillip 66 has been cited repeatedly with violations of air pollution caused by leaks at its refineries, flooding the surrounding communities with toxic emissions linked to acute and chronic health conditions. Diego believes that the poor air quality and air pollution-related underlying health conditions make his community more susceptible to severe illness and higher rates of death from COVID-19. 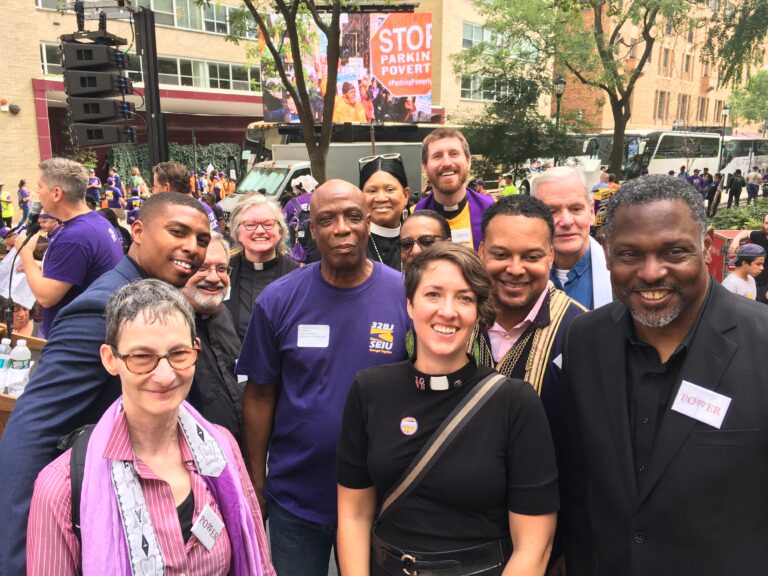 Philadelphia is a city of neighborhoods with tremendous religious, ethnic, racial and cultural diversity and a history of inspiring liberation struggles. Unfortunately, it is also a city of extreme inequality where 27% of people live in poverty and 12% live in deep poverty. The forces that shape this poverty – the loss of good union jobs, disinvestment in public education, over policing and mass incarceration and the expansion of toxic emissions – impact Black and Brown people the most severely. The same communities most impacted by fossil fuel infrastructure are also being hit hardest by COVID. The relentless expansion of fossil fuel infrastructure in Philly both exposes residents to toxic emissions and also prevents our work force from entering a green economy of good-paying, sustainable jobs. As our public and private utilities (Philadelphia Gas Works and PECO) refuse to plan for a green transition, they are blocking the Great Turning toward an energy economy that could support healthy communities.

We are part of dynamic campaigns around intersectional justice issues in Philly. We’re trying to stop the proposed SEPTA fossil fuel plant in Nicetown, and opposed the “gift” of a liquid and natural gas plant to PGW (we lost this battle, but did succeed in winning a city-council funded study of a green transition for PGW). PhillyThrive, our ally, organizes the most impacted people in the footprint of the Philadelphia Energy Solutions refinery in the Right to Breathe campaign. This campaign has been enormously effective; the refinery is now permanently closed and there is a new owner. The goal now is to carefully monitor the new owner, Hilco, and to participate in envisioning green economy uses for the land. We work with our faith-based partners the Earth Quaker Action team (EQAT) in the Power Local Green Jobs campaign calling on PECO to commit to raise its purchasing of local solar power from less than one percent per year to 20% of the energy PECO buys, bringing good paying jobs to where they are needed the most. We are contesting for our energy future in the public sphere: at City Council committees, in Public Utility Commission hearings, through creative direct actions and through the courts. 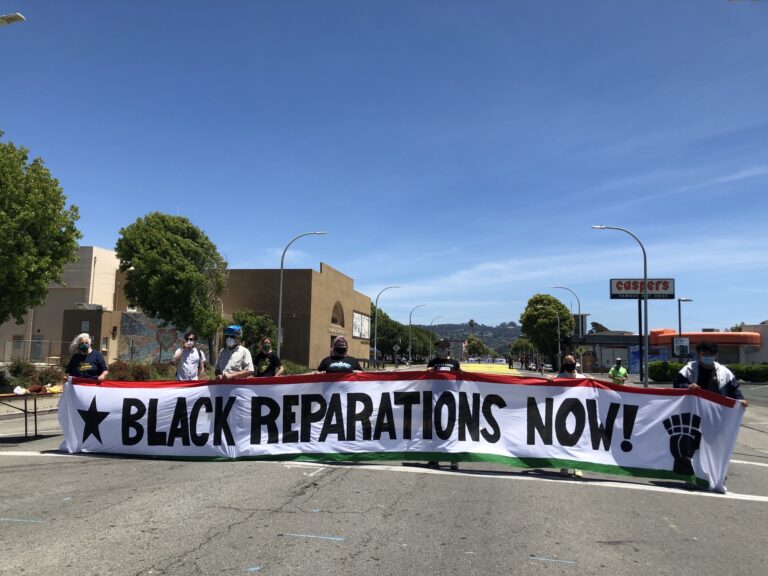 The City of Richmond, California is an ethnically diverse and multi-cultural city that sits directly across from the San Francisco Bay. The city was home to one of the largest wartime shipbuilding operations on the West Coast during World War II, which led to explosive growth and mass in-migration of Black workers seeking to make better lives for their families, as Jim Crow laws throughout the South severely restricted the possibility of social and economic mobility. Tragically, Black workers were relegated to menial, unskilled positions while redlining and restrictive covenants forced these workers and their families into racially segregated neighborhoods throughout unincorporated North Richmond. Today, Black, Latinx and Asian people make up 97 percent of North Richmond residents and North Richmond neighborhoods are surrounded by hazardous uses such as the Chevron Richmond Refinery, chemical companies, highways, rail yards, and ports.
Miguel Diaz-Mejia is a senior at Richmond High School and has been living in Richmond for six years. He is an intern with Communities for a Better Environment (CBE), an environmental justice organization focused on building people’s power in California’s communities of color and low-income communities to achieve environmental health and justice by preventing and reducing pollution, building green, healthy and sustainable communities and environments. Miguel wants the Chevron Richmond Refinery to stop polluting and poisoning his community. He says the toxins that the refinery releases have contributed to higher rates of asthma and that this pre-existing respiratory condition puts his community at greater risk of more severe cases of COVID-19.

“There are lot of workers who live in Richmond, [Chevron] exposes
them to harmful chemicals and pollutants. Now with COVID, on top of
wildfires, it’s really heavy on the community. There are a lot of
essential workers here – so people have to go out to work, which is
dangerous because they could contract COVID and expose their family
to COVID.”

In 2014, Chevron Richmond Refinery was fined by the San Francisco Bay Area Air Quality Management District for a $278,000 civil penalty covering 27 violations occurring between 2011 and 2013. In 2012, due to technical and management failures, a massive fire broke out at the facility that led to a cloud of toxic smoke spreading over Richmond, prompting 15,000 residents to seek medical treatment. In 2013, the Division of Occupational Safety and Health issued 25 citations accompanied by a $963,200 fine against Chevron in connection to the disastrous fire at the Richmond Refinery. Investigators found willful violations in Chevron’s response before, during, and after the fire.

Miguel believes the fines are not enough, asserting these payments “don’t take back all the harm they [Chevron] did to the community all these years and this doesn’t address the problem – they’re still violating guidelines.” Miguel and his colleagues at CBE are calling for a transition of the Chevron site to uses that will keep his community safe, provide good paying jobs, and address other local needs, such as a solar panel field, grocery store, and community garden. “A lot of people who go to college [in Richmond] want to move to a better place afterwards but I want to make Richmond the better neighborhood instead of just leaving,” said Miguel.